Adventures in a Police Helicopter

Adrian Bleese spent twelve years flying on police helicopters and attended almost 3,000 incidents as one of only a handful of civilian Air Observers working anywhere in the world.

In Above The Law he recounts the most interesting, difficult, emotionally charged, funny and downright baffling highlights of his career working for Suffolk Constabulary and the National Police Air Service. The events he was involved in were often life and death or, at the very least, life-changing for those involved. From his observer’s perspective, he describes them with real compassion.

While he does not shy away from tackling some of the darker sides of policing such as traffic accidents, missing persons and armed crime, this book is, above all, about helping people, about a passion for flying and for the countryside and, perhaps more than anything, about hope. 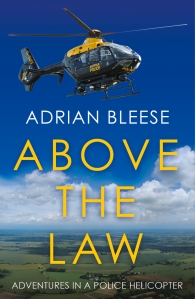 I don’t often read non-fiction, but when I saw a mail about this book had landed in my mailbox, I immediately wanted to read it. It intrigued me. I wanted to know more about what the people in police helicopters deal with.

The author has taken a lot of time in explaining everything from A t Z to the reader. He talks about the kind of helicopters that are being used, what people have to do before they become an observer, the regular tests they have to take in order to be allowed to keep on working in this position and the cases they are asked to help with.

He also talks about the history of the places he works in and of the glory and unfortunately less glory days of the air service.

During the book you feel the love he had for this job and the sadness when he had to give it up. You feel the happiness when they could help solve a case and helplessness when they couldn’t. There are a lot of emotions woven through the words. Even though it’s about a serious subject, it does not mean it has to be boring and the author made sure of that by adding a few jokes and the right balance between historical and technical facts and his experiences.

I really enjoyed the writing style. Well, it felt more like I did not have to read, but that the book talked to me. I hope this makes sense. 🙂

Thank you, Adrian Bleese and Eye And Lightning Books

was born and raised in the northwest of England before joining the Royal Air Force to fly on search-and-rescue and submarine-hunting missions. On leaving the RAF, he was stunned to discover that no one needed any submarines hunted and he was therefore forced to find a real job. Following some time working in advertising, he began working for Suffolk Constabulary and spent twelve years flying on police helicopters, attending almost 3,000 police tasks even though he was neither a policeman nor a pilot. He was one of only a handful of civilian air observers working anywhere in the world.

Flying and writing have been two of his lifelong abiding passions. He has had a monthly column in an aviation magazine and also written flight safety and aviation history features.

He has lived in East Anglia for more than twenty-five years, is a keen private pilot and has a great love for his adopted home, the countryside and its history. 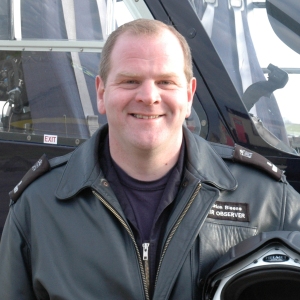