Damage’s club has had an offer it can’t refuse, to patch over to join The Brethren MC.

But as the bikes rumble and roar across the wild Northern fells, what does this mean for Damage and his brothers? What choices will they have to make as they ride through the wind? What bloody oil stained history might it reawaken? And why are The Brethren making this offer?

Loyalty to his club and his brothers has been Damage’s life and route to wealth, but what happens when business becomes serious and brother starts killing brother?

From being in a gang to becoming a gangster, Heavy Duty People is the book that invented Biker Noir.

Get Carter meets Sons of Anarchy in this gritty British crime thriller, now in development for TV. 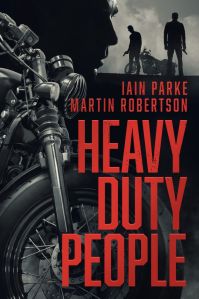 I write in my home office. I’m easily distracted so I just need to shut myself away some where with as few distractions as possible and starting a new book usually takes a while as I find things to tidy in my room or sort out on my desk before I can concentrate.

Having said that I tend to work in short bursts and get up and wander around about every half hour.

When I’m writing I just get into a habit where it takes up most weekends. When a story is flowing I can usually write something like 4-5000 words over a Saturday and Sunday.

I usually have an overall idea in mind and I tend to create the ‘key scenes’ first and then work through the linkages. Where and how the scenes fit together can go through quite a lot of rearranging as I go and of course as the characters get to work they have their own ideas and can start to take over so quite often their logic means the book ends up somewhere quite different from where I’d expected.

No. When I’m focussed on writing I just get on with it.

Difficult to choose but in terms of which I’ve reread the most has to be either fatherland or Tinker Tailor.

I have another writing career in non fiction business books, and my last fiction was a WW2 / contemporary conspiracy thriller so yes I do experiment with other genres.

My characters are fictional but they sometimes have elements that I’ve drawn from people I’ve known. Certainly characters’ names are often real in that they come from people I know or have known in the past which means there’s a fair few ‘in jokes’ in my books. The names have to fit so when writing my biker books most of the nicknames have come from that community.

And as an author having fun with characters is one of the perks of the job. It’s not everyone who gets to garrotte their ex-boss…

I scribble notes everywhere, all the time (I’ve had to get a dictation machine to stop me trying to scrawl things at traffic lights while driving).

But I then need to get these into my computer as soon as possible. My handwriting is so awful I can’t read it the next day so if it weren’t for the computer I’d never get anything done.

I’ll try reading most things, just to see how the genre works if nothing else.

I’ve co-edited a couple of books but never co-written. Given the choice it would have to be Richard Harris as the current master of the genre.

Iain Parke imports industrial quantities of Class A drugs, kills people and lies (a lot) for a living, being a British based crime fiction writer.

Iain became obsessed with motorcycles at an early age, taking a six hundred mile cross-country tour to Cornwall as soon as he bought a moped at the tender age of sixteen. After working at a London dispatch job delivering parcels on a motorcycle, he built his first chopper in his bedroom at university, undeterred by the fact that the workshop was upstairs.

Iain worked in insolvency and business restructuring in the UK and Africa, where he wrote his first thriller The Liquidator. The success of that propelled him to write a ‘biker lit’ trilogy about the Brethren Motorcycle Club, a ‘cult’ hit which has recently been optioned for television. Today Iain lives off the grid, high up on the North Pennines in Northumberland with his wife, dogs, and a garage full of motorcycle restoration projects. 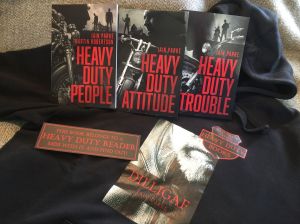