Sarah Bennett has two secrets: she sees ghosts, and she is in love with a spy.

When Sarah takes a job with occult expert Dr Matthew Geisler, he promises to help her understand the sorrowful spirit that seems to have attached itself to her.

As Sarah struggles to cope with the ghostly presence, she runs into Zeke, the man who left her six months earlier and is recovering from injuries suffered in an alleged accident. But Zeke has secrets of his own, and when an attempt is made on Geisler’s life, Sarah finds herself caught in a struggle between the living and the dead.

Unsure who she can trust, Sarah must solve the mystery of the soul determined to haunt her, and save Dr Geisler and herself from an unknown threat.

This book was previously published as WEEPING IN THE WINGS

The House of Secrets is 99p throughout June as part of the June Kindle Monthly deal.   The Spirit of Grace, book 1 in the series is also .99 throughout June. 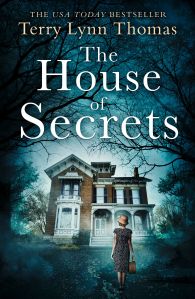 I pretty much stick to regular books right now.

Luckily, I come from a reading family. My parents and my sibling always read a lot for pleasure and for work. Our house was always chock full of books, and our libraries – at the time I was growing up, anyway – were always fully funded, loaded with new and old books, and wonderful places to visit. I think when kids see their parents reading, it influences them in a huge way.

This is a good question. A fully fleshed out villain needs to be a hero in his own mind. To my way of thinking, they are driven to do their bad acts by – at least what they perceive – some injustice or belief. Having said that, I have definitely pulled my villain’s character traits from people who have not treated me well. And when they get their comeuppance, yes, I do smile. 😉

Oh, another good question. I collect first and last names in a notebook. When it comes time to choose a name for a character, I get comfortable with who they are, learn their flaws and their attributes, and then choose a name that suits them. I think character naming is really important, so I am rather deliberate in the process of doing so.

Do you write other things beside books (and shopping lists 😉 )?

Before I quit my day job to write full-time, I did a lot of legal writing. Now, other than the occasional blog entry, I’m lucky enough to spend my time writing novels. I adore it and thank my lucky stars every day.

That’s a tricky one. Television and movie scripts follow a certain structure in order to adhere to time constraints. I would be happy if my characters were accurately portrayed, but would have to insist that certain plot points were hit. Having said that, what a thrill to see my characters come to life!

Oh, so many authors! Agatha Christie and Robert Parker influenced my writing in a huge way. Would love to interview both of them.

Reaching out to experts is par for the course for any author, so I am no stranger to writing the Can you please help me… email. And I am always amazed at the generosity of others with their time and knowledge.

Lisa Ricard Claro and Barbara Davis (both amazing authors in their own right) have talked me off the ledge more than once. Writers are a generous tribe. Everyone is really supportive of each other. This bonhomie is one of things I love most about this job.

What is more important to you : a rating in stars with no comments or a reviewer who explains what the comments they give are based on (without spoilers of course)

From the business perspective, the rating with stars is easier for the reader. Reviews are so important for the algorithms, but I hate asking people to actually write them. (Book report!) Not everyone has the time or inclination to do that. Just checking the stars is totally helpful. Of course, I do love to hear from readers and get feedback/constructive criticism about my stories. When I sit down to the blank screen, I do so with my readers in mind. When someone reaches out to me, it makes my day!

Terry Lynn Thomas grew up in the San Francisco Bay Area, which explains her love of foggy beaches and Gothic mysteries. When her husband promised to buy Terry a horse and the time to write if she moved to Mississippi with him, she jumped at the chance. Although she had written several novels and screenplays prior to 2006, after she relocated to the South she set out to write in earnest and has never looked back.

Terry Lynn writes the Sarah Bennett Mysteries, set on the California coast during the 1940s, which feature a misunderstood medium in love with a spy. The Drowned Woman is a recipient of the IndieBRAG Medallion. She also writes the Cat Carlisle Mysteries, set in Britain during World War II. The first book in this series, The Silent Woman, came out in April 2018 and has since become a USA TODAY bestseller. When she’s not writing, you can find Terry Lynn riding her horse, walking in the woods with her dogs, or visiting old cemeteries in search of story ideas.