Ros March, disabled lesbian mum and former Royal Marine, has just moved to Turnberry on Scotland’s west coast. Her cottage overlooks one of the world’s most famous golf courses – Trump Turnberry – as well as the scenic bird sanctuary Ailsa Craig. But idylls deceive. In truth Ailsa was once overrun by rats, who were exterminated at the end of the twentieth century, and Ros’s landlord turns out to be a delusional Islamophobic misogynist who calls himself ‘Potus Two’. When Potus Two announces that both he and Ros will have the chance to meet the President on Turnberry’s hallowed grounds, Ros hatches a plan. Even a slim chance to do something about one of the biggest rats in the world is not something she will pass by. 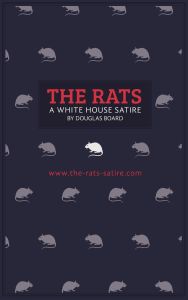 Ros March, a disabled special forces veteran, moves to Scotland for the summer. She’s chosen Turnberry, which hasn’t much to offer except for Donald Trump’s golf course and the birthplace of Robert the Bruce. Like Jack Reacher, Ros has no time for golf – but she does have time for justice.

Trump is a shameless golfer and promoter of his own courses, and a sucker-up to the military. He’s also a booster of his ‘Scottish ancestry’. Ros’s landlord, a local weirdo who calls himself ‘POTUS Two’, is going to give Trump a ‘certificate’ declaring Trump to be descended from Scotland’s most famous king. That will be Ros’s opportunity to do what she came to Turnberry for.

A call from Shona thirty minutes later gave Ros a jolt. ‘I got a text,’ Shona said. ‘You know William works at Prestwick? Air Force One has just landed. Trump should be at Turnberry in twenty minutes.’

There was nothing to see on television, but a tourist tweeted a picture of six black limousines shooting out of the airport. Meanwhile at Turnberry, the local police conscripted golf flags into service as a security perimeter. Reinforcements of Glasgow ‘polis’ would take a couple of hours to arrive, filling out their overtime dockets on the way; until then the objective of the President’s Security Service was to isolate the promontory on which the lighthouse sat, rather than the resort as a whole. Games were canceled in mid-play. By the time POTUS Two and Ros reached the checkpoint at the fourteenth hole, a helicopter had offloaded sharpshooters and a coastal protection boat was heading down the Clyde.

Restoring the yellow-and-white 1873 lighthouse and keeper’s lodgings had been part of the Trump investment. Golf fans could now book the tower’s Presidential suite, with balconies offering views in every direction. A photograph in the clubhouse showed Trump (sporting a ‘Make America Great Again’ cap) interrupting his 2016 campaign to cut a ribbon here with Donald Jr, Eric and Ivanka. In 2017, Eric returned with actors in mediaeval dress to invoke the memory of Scotland’s hero-king.

Approaching the checkpoint, POTUS Two threw out a straight back and a commanding jaw to control his jitters; Ros struggled to keep a straight face. A tic had taken her left cheek hostage, signaling the security detail like a flashing headlight (so she felt). Surely the two of them were about to be sent packing, two kids in party get-ups trying to trick-or-treat the most powerful man in the world.

Thank you, Douglas Board and Rachel’s Random Resources.

Douglas Board is the author of the campus satire MBA (Lightning Books, 2015), which asked why so much of the business world is Managed By Arseholes. Time of Lies, his second novel, is a timely exploration of the collapse of democracy.

Born in Hong Kong, he has degrees from Cambridge and Harvard and worked for the UK Treasury and then as a headhunter. He has also had a distinguished career in public life, serving as treasurer of the Diana, Princess of Wales Memorial Fund and chairing the British Refugee Council.

As well as writing fiction, he is the author of two applied research books on leadership, which was the subject of his doctorate. He is currently a senior visiting fellow at the Cass Business School in London. He and his wife Tricia Sibbons live in London and Johannesburg.