Faye has found sanctuary in a simple cabin in the wilds of the Crazy Mountains in Montana with a dog called Bear. She’s a long way from her old life in England. But she knows that one day her peaceful life could be invaded by her enemies, and she keeps her guard up at all times.

Jeff returns home from Vietnam, a wounded, damaged hero, just weeks after his father’s sudden death. He finds hostile, secretive Faye living in his cabin and refusing to leave. The reading of his father’s will adds another layer of mystery to this woman’s presence.

The tension between them grows as Jeff tries to overcome his nightmares and expose Faye’s scars and secrets. The more he learns about her, the more enigmatic she seems.

When her enemies come calling, she needs Jeff to protect her. Can they learn to trust each other? And will Faye ever be safe? 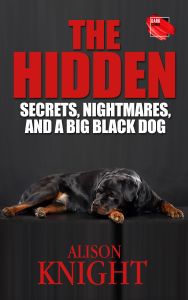 Did or do you like to read comic books/grapic novels? Which ones?

Comic magazines were very popular when I was a child, but there weren’t many comic books or graphic novels around then, so I never really got into them.  I’ve always preferred story books where I can let my imagination fly with the words, building the pictures of the action in my head.

My mother encouraged me to read – in fact she taught me the basics before I even started school at age five. I won a prize for reading in my first year in infant school, which gave me even more encouragement. My only sibling was several years older than me, so we weren’t natural playmates. Therefore I turned to books where I had lots of adventures with the characters in the stories I read.

Sometimes! But mainly, as characters develop on the page, I sometimes think: “I don’t like you very much, so you’re heading for a bad end.” In The Hidden, there are a couple of crooks who pursue the heroine across the Atlantic, intent on revenge. They are their friends come to a very bad end!

It’s not always easy – and I have an editor who often wants me to change names if their initials are the same or they sound similar to avoid confusion for my readers. So I have to be careful. I take into account popular baby names in the years when my characters were supposed to have been born, but also their class, possible nicknames, etc. Sometimes, a name seems to fit a particular character, which is a great gift for a writer.

In The Hidden, I am writing about a character from my previous book The Legacy. But she’s in hiding and has changed her name. So I used a derivative of her name in both cases – so a woman born as Felicity was known as Fliss in The Legacy, but changed it to Faye in The Hidden.

Apart from blogs promoting The Hidden, I don’t have time for a lot of other kinds of writing at the moment as I’m already deep into my next project. It’s a series of six books about a group of friends who grew up in care together. It’s a contemporary set of stories, following their fortunes now they are all in their mid to late twenties. They’re finally in a good place and decide to find out what really happened when they were children and why they ended up in the care system.

That’s a tough one. Part of me would love someone to turn my books into movies or series, but I’m aware that I’m usually disappointed by the film versions of books I’ve read. It would be nice to think someone loved my books so much they wanted to remain faithful to my stories. For example, I love the picture of the big black dog, Bear, on the cover of The Hidden and I would love to see an animal just like that star in the movie of The Hidden. But in the real world, I think I would probably have to agree that they produce ‘based on’ versions and try not to get too worked up about it. So long as watching it encouraged people to read my books, I think it should be okay.

I don’t think I would want to interview a great writer, because I’ll get star-struck and tongue-tied and look like an idiot. So I’d rather go back and interview my secondary school English teacher – a lovely lady called Miss Jane McIntosh, who taught me at Kidbrooke School in Southeast London in the 1970s. I’ve wanted to find her and talk to her since I had my first book published, but sadly I haven’t been able to trace her. So if anyone knows her, please ask her to get in touch!

I rely on a mix of research books, internet searches and experts. For example, I have a cousin who spent several years as a forensics officer with the Metropolitan police who now provides expert guidance for authors. I’m currently picking the brains of a friend who spent several years in the travelling community to help me with a plot line in my new series. Certain friends have specific knowledge of historical periods or local history or a particular job. Specific groups on Facebook are great for getting first-hand information about particular issues. I’m happy to contact anyone who can provide me with an authentic view of an area of expertise or locality I want to write about.

For The Hidden, I used my experience of living as an exchange student in the US in the 1970s to give me a flavour of the culture and language of the time.

I’m very lucky in that I have a lot of friends who are writers, so there’s usually someone with whom I can talk things through. My first port of call is my dear friend and business partner, author Jenny Kane. We run writing workshops, courses and retreats together as Imagine Creative Writing (www.imaginecreativewriting.co.uk ). Like me, she writes in more than one genre and has a wide range of interests, so she’s a great person to talk to about writing dilemmas.

What is more important to you : a rating in stars with no comments or a reviewer who explains what the comments they give are based on (without spoilers of course)

What writer doesn’t love a five star rating? Seriously though, both are important. It’s good to see what people think about my books. I am realistic enough to know that I’m not perfect, so I welcome constructive criticism, and I’m always grateful to reviewers who are careful not share spoilers as I like my readers to enjoy the twists and turns of my stories. I hope that the combination of star ratings and reviews will persuade people to read my books.

Thank you so much for welcoming me onto your blog and for your interesting and challenging questions!

Alison Knight has been a legal executive, a registered childminder, a professional fund-raiser and a teacher. She has travelled the world – from spending a year as an exchange student in the US in the 1970s and trekking the Great Wall of China to celebrate her fortieth year and lots of other interesting places in between.

In her mid-forties Alison went to university part-time and gained a first-class degree in Creative Writing at Bath Spa University and an MA in the same subject from Oxford Brookes University, both while still working full-time. Her first book was published a year after she completed her master’s degree.

Alison currently has a trio of novels published by Darkstroke. The first, Mine, is a domestic drama set in 1960s London based on real events in her family. She is the only person who can tell this particular story. Exploring themes of class, ambition and sexual politics, Mine shows how ordinary people can make choices that lead them into extraordinary situations.

The Legacy, a drama set in London in 1969, was inspired by a scene in Mine, and explores how an unexpected legacy can be both a blessing and a curse. The Legacy looks at themes of greed and expectations, and the lengths people will go to when they are desperate.

The Hidden, available from September 2021, is a romantic suspense that picks up the story of one of the characters in The Legacy. Set in Montana in 1973, two wounded, damaged people are forced together, each guarding their secrets. Can they learn to trust each other? And will their nightmares ever end?

Alison teaches creative and life-writing, runs workshops and retreats with Imagine Creative Writing Workshops(www.imaginecreativewriting.co.uk) as well as working as a freelance editor. She is a member of the Society of Authors and the Romantic Novelists’ Association.

She lives in Somerset, within sight of Glastonbury Tor.