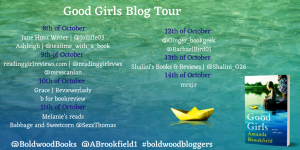 Good Girls never tell tales…
Everyone that meets Kat Keating is mesmerised. Beautiful, smart and charming, she is everything a good girl should be.

Her sister Eleanor, on the other hand, knows she can’t compete with Kat. On the awkward side of tall, clever enough to be bullied, and full of the responsibilities only an older sibling can understand, Eleanor grows up knowing she’s not a good girl.

This is the story of the Keating sisters – through a childhood fraught with secrets, adolescent rivalries, and on into adulthood with all its complexities and misunderstandings. Until a terrible truth brings the sisters crashing together and finally Eleanor begins to uncover just how good Kat really was.

Amanda Brookfield is the bestselling author of 15 novels including Relative Love and Before I Knew You, and a memoir, For the Love of a Dog starring her Golden Doodle Mabel.  She lives in London and is currently a Visiting Fellow at Univ College Oxford. Her first book with Boldwood, Good Girls, will be published in October 2019.