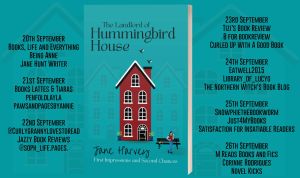 When April moves into Hummingbird House, she is intrigued by her mysterious landlord, Dai.

With a bruised heart and a distinct lack of furniture, she spends the summer getting to know the other occupants. As she smartens up her home and makes peace with her recent past, she befriends Paul, a solitary ex-chef, and Betty, an elderly lady who lives in the basement flat.

But Hummingbird House holds many secrets, and the relationships of the tenants are not as straightforward as they seem. April learns some shocking truths one eventful night, and realises that victims and villains can look the same.

The Landlord of Hummingbird House is a contemporary novel exploring unlikely friendships, unexpected love interests, and family relationships. Here, everyone is in need of a second chance – and appearances can be deceptive. 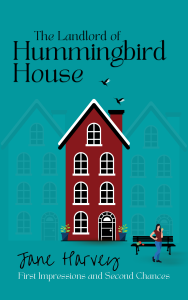 When I first committed to writing in a dedicated and ‘organised’ way – three years ago – it happened because I was experiencing terrible insomnia. I still get many nights of poor sleep, and always have, but at this stage I was waking routinely each time around 2.30am. I could not get back to sleep, no matter what I tried. When all else had failed, I decided that on weekends I would get up, and write. I figured that it was unlikely to help the insomnia but at least I would have something concrete and positive to show for that time.

Now, I write – or am working on other aspects of writing (marketing, editing, etc.) – every spare moment I can. I have even been known to write whole short stories on my mobile phone. I do something towards my writing every day, even if only updating my social media, which I do at least twice a day, if not four or five times (across all my platforms).

I am not very disciplined about sitting properly at a desk to work. More often than not, I am sat in pyjamas and/or snatching a few moments, so I sit on the bed, or on then couch, with a laptop tray, or I write while eating a sandwich for ten minutes at lunch. Nothing very glamorous!

Not exactly, but I have developed routines, which have helped my writing career to become a reality. I was determined to make sure that it wasn’t a short-lived fad, when I returned to writing in 2018, so I set myself clear targets at that time.

Now, my routine is to post to Instagram in the morning, and to Facebook in the evening. I make teasers and images every Sunday and store them up for further use. I write every Saturday, for a few hours, and of course at several other points across the week. But I don’t have anything ritualistic regarding the writing process itself. Except obsessive file saving, I suppose.

I don’t eat while writing unless I am trying to squeeze it in during a work lunch break. I am likely to have a cup of Earl Grey tea or a white coffee along the way – I am lucky that my husband is very good at producing a ready supply of these. I do like some wine afterwards, sometimes, but I don’t drink alcohol while writing – I imagine my typos would be dire.

I was dreading this question! I have an enormous affection for To Kill a Mockingbird, as I used to be an English teacher and I often took the (ridiculously ambitious) option of reading and studying it in a few months with students who were re-sitting their GCSE at College. They could never believe the trial outcome, expecting a ‘Hollywood’ ending. It is a remarkable book.

I also love nineteenth century literature such as Jane Austen and then the Brontë’s. The changes in women’s circumstances over those decades are amazing. I have referenced a few of the classics in The Landlord of Hummingbird House, and I hope I have turned a few of the tropes associated on their head.

The Landlord of Hummingbird House started life as an attempt at a pure ‘chick lit’ type book. I write under another name where I have produced some more earnest (and sometimes experimental) work, and I wanted to do something light and fun. In the end, it evolved into a cross-genre book, that still has elements of women’s fiction and a little contemporary romance, but more mystery and intrigue than I expected. I am wondering if I could write a true mystery novel, going forward, and am mulling over some ideas.

I have never based an entire character on a real person, and I am not sure it would be fun to do so – at least, not for me. I think I would also be paranoid that they would realise! I love exploring and developing character. I have twisted a few real-life scenarios or embarrassing events and added them to my books. But they are mostly situations where I have made a fool of myself, personally, rather than exploiting anyone else’s misery!

For work, I always write in a notebook, but for some reason for my writing I make notes on my phone. I write down delicious words and phrases that people say, and usually have a list of antiquated words on my mobile.

If you had asked me this a couple of weeks ago, I would have said speculative fiction. But I have recently had a revelation that Magic Realism – writing about impossible events and characters such as mermaids, for example, – counts as speculative. For some reason, I had always associated the genre with sci-fi and fantasy only. That’s shameful to admit, as it’s obvious when you think about it, but true. While I don’t usually warm to books in other dimensions or set in the dark ages, or future, etc, I do love a bit of magic in contemporary fiction.

That all being said, there are books in every genre that I have loved. The Girl With All The Gifts is a great zombie book, for example, though I don’t usually lean towards that type of fiction… So I never say never.

There are a vast number of writers I admire, so I am going to narrow it down to people that I think I could align with, in terms of style or genre. I loved the Rosie Project books, by Graeme Simsion, and I think we could work well as I also love to include offbeat characters. Ultimately, though, my dream co-writer would be Marian Keyes. I love her attitude, her books, her openness. Everything about her. If I could be half as good as her, I would be one happy writer.

You are asking the wrong person – I am fantastically impatient about research! I would need some real incentivising, so I am going to say a Greek Island. I love Greece and I am an island girl through and through. Could my research revolve around food and cocktails, perhaps?

Jane Harvey is a pen name (shhh). She crafts fun fiction for the thinking woman, where she enjoys exploring unexpected friendships and writing happy endings. This is lucky, because in real life her (prize-winning) fiction is a little bleaker. She was born and raised on the island of Jersey, and lives with two males and a dog. She owns an admirable collection of animal vases and unusual lighting.