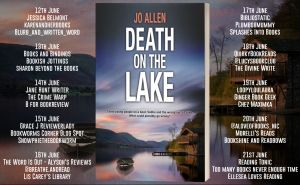 Three youngsters, out for a good time. Vodka and the wrong sort of Coke. What could possibly go wrong?

When a young woman, Summer Raine, is found drowned, apparently accidentally, after an afternoon spent drinking on a boat on Ullswater, DCI Jude Satterthwaite is deeply concerned — more so when his boss refuses to let him investigate the matter any further to avoid compromising a fraud case.

But a sinister shadow lingers over the dale and one accidental death is followed by another and then by a violent murder. Jude’s life is complicated enough but the latest series of murders are personal to him as they involve his former partner, Becca Reid, who has family connections in the area. His determination to uncover the killer brings him into direct conflict with his boss — and ultimately places both him and his colleague and girlfriend, Ashleigh O’Halloran, in danger…

Jo Allen is the author of the successful DCI Satterthwaite series of detective novels set in and around the English Lake District, where she lives. After a career in economic consultancy she took up writing and was first published under the name Jennifer Young in genres of short stories, romance and romantic suspense. In 2017 she took the plunge and began writing the genre she most likes to read – crime. In common with all her favourite characters, she loves football (she’s a season ticket holder with her beloved Wolverhampton Wanderers) and cats.