Dawn of the Hunters

Even the Hunters of Infinity are splintered when faced with the greatest battle in the Daharian galaxy’s history . . .

Jessop has proven herself to be an unstoppable force from Aranthol to Azgul, inarguably the fiercest warrior the Hunters have ever seen. And her abilities only seem to strengthen as her rage grows. With the two men she holds dear by her side—one good-souled, one with a treacherous past, and both deadly with a sword—she prepares to enter the most important fight of her life, with the most personal stakes yet . . .

Armies are divided and reforged, and battle lines are drawn. Blind loyalty drives some while others are sworn to protect the galaxy at all costs.

Bonds will be tested.

Lives will be lost.

Consequences will be devastating. 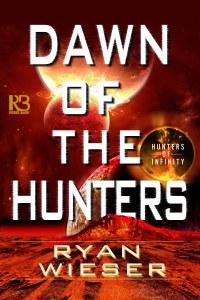 The Hunters of Infinity have guarded the Daharian galaxy for ages, but when betrayed, they can become a vicious enemy . . .

Jessop, the first woman to join the Hunters, has finally been reunited with those who mean the most to her. In her quest for vengeance, she has left many embittered and betrayed, chief among them Kohl O’Hanlon, the Hunter who once loved her.

Now, as the feared Falco Bane leads his forces into the Hunters’ territory, Kohl attempts to retaliate, flooding their infamous Shadow City with his own followers. Jessop must fight a war on two fronts, testing her commitment to the ones she loves and challenging her abilities as the most elite warrior among the Hunters. With the future of Daharia’s leadership at stake, Jessop is determined to protect those closest to her at all costs . But when allies turn into adversaries, the real threat comes from a place least expected . . . 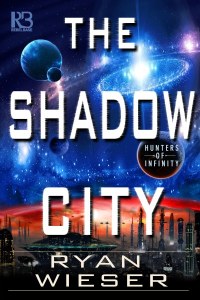 The Hunters of Infinity have been protecting the Daharian galaxy for years, but there has never been a female Hunter—until now. In a seedy bar in the shadowy corners of Daharia, Jessop comes to the rescue of young Hunter Kohl O’Hanlon. Impressed by her remarkable sword-wielding skills, the Hunters invite her to their training facility, the Glass Blade, though not all are pleased with the intrusion. But they soon discover that Jessop learned to fight from the rogue leader of the Shadow City of Aranthol—and escaped. Now they want to use her intimate knowledge of their enemy to destroy him. As Jessop grows closer to this elite brotherhood, their leader succumbs to a mysterious ailment, and Kohl learns that Jessop is hiding dark secrets, raising suspicions about the enigmatic woman who saved his life. Has the Hunters’ security been breached—or do they have a traitor in their ranks? Allegiances will be questioned. Loyalties will be betrayed. Vengeance will be brutal. “This thrilling, action-packed debut ties together a strong characters with a building story line that will have readers clamoring for the next volume in this new series.” —Library Journal, STARRED REVIEW, on The Glass Blade 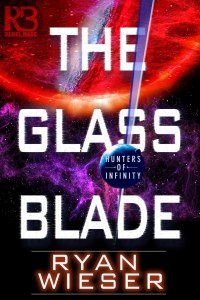 As we approach the end of the protagonist-led fantasy trilogy, Hunters of Infinity, readers are wondering if this is the last we will be seeing of Jessop? If so, what is author Ryan Wieser working on next?

The entire experience of writing this story has gone by in the blink of an eye, as clichéd as that is to say, it’s simply true. Even though the last book is done, I honestly can’t say if this is it for Jessop, Falco, and Kohl (if they all survive to the end of the last book, that is…).

If you love your characters it feels impossible to say that you’re done with them forever. And I love these characters. They’re crazy, impulsive, and immature. They make the same mistakes over and over. They are blinded by their motives. But they all end up on the same quest for redemption, reaffirming their love and loyalty along the way. For me, the trilogy was always about the personal journey and relationships of these characters. It is difficult to know for sure if their stories are completely done. Maybe it’s their time. At this point, I can’t say for sure what will happen.

Like my main characters, the trilogy is imperfect, but with each book, it developed more and more. I definitely feel like I had the opportunity to learn a great deal and to exercise new skills with each installment, and in some ways, that’s what Jessop, Falco, and Kohl do – with each book, they learn and they change. I do think that perhaps with a trilogy, you have more room to explore and more pages to fill. It all depends on the way you write, how much of your plot is planned in advance, how many pages you intend to utilize to tell your story… There are a lot of factors to consider. Oddly, I wasn’t necessarily trying to write a trilogy when I started writing the story; I was more focused on the characters, their relationships, histories, and individual profiles. If anything, the trilogy helped provide some structure and give the overarching story a beginning, middle, and an end.

In terms of next projects, I am actually already busy working on my next book, a medieval-esque fantasy novel. I learned a lot from the trilogy. I got some amazing reviews and a lot of feedback, some wonderful and some less so, but all of it served a purpose. My flaws as a novice writer have been highlighted, the interests of my readers have been made known, and the path forward has been laid out with hope and determination. This next book is really quite different from the Hunters of Infinity series. While it is also an action packed fantasy led by a strong female protagonist, it’s set in a different world, a different time, and supported by an entourage of different characters. I’m excited to see where these new characters go. I am committing to them with the same passion and care I did for Jessop and her leading men and it’s my hope that they are received by my readers with as much enthusiasm and support (if not more!).

Ryan Wieser completed her B.A. in Sociology and Socio-Legal Studies before going on to complete her MSc. in Experimental Psychology. Having been raised in Africa and educated across multiple countries, Ryan has a passion for travel and an interest in diverse cultures. She currently resides in Wyoming with her husband, where she is writing her next book.