When a travelling salesman finds a town that’s not on the map, he must choose between romance and a long-held promise of untold riches.

Beckman Spiers is a grey man in a grey world—and he’s happy with that.

After 12 years of routine and grind, he’s again fighting to become Number One Salesman of the Year. Legend has it, Number Ones get so rich, they never work again. With a week to go, Beckman is gaining on his nemesis, smooth-talking Tyler Quittle.

When a chance blowout on a deserted Arizona highway leaves Beckman stranded, the mysterious Saul arrives, and tows him to the strange neon-lit town of Sunrise. Here, he meets the glamorous Lolita Milan and his fortunes change.

Yet, Sunrise’s small-town charms conceal secrets, and his world becomes one of private investigators and backstabbing business deals.

What will he have to do to reach Number One? And what will he do if he wins the race? 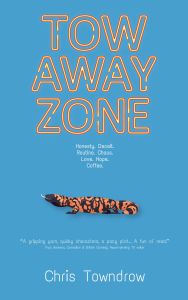 I prefer to write away from my home office desk, because it separates ‘work’ and ‘hobby’. The ideal is time is on holiday, because I’m freer of distractions. That said, I’m lucky that when I’m in the process of writing a draft, I can write pretty much any time or place.

The only precondition I have is being ‘ready to write’. I don’t sit down at a blank page and force words out. When I have means, motive and opportunity, I open up Scrivener. The pattern of my writing is to outline for a few weeks, then schedule the first draft for a period when I know I’ll have the most free time, then I can usually produce 2000 words a day for 45 days.

Water is the only constant companion.

I don’t have a favourite, only books which have influenced my writing journey. The most notable is Iain M Banks ‘Consider Phlebas’, which catalysed a huge leap forward in my style.

I’ve predominantly written sci-fi (near-future adventures), but Tow Away Zone was such an enjoyable endeavour that I can see romantic comedy featuring heavily in my future canon. Comedy, or at least wit and banter, has been an element of most things I’ve written, so it feels natural.

In 2021 I wrote my first historical fiction novel – currently querying, and in 2022 I’m working on a dystopian drama. I’ll certainly consider more historical fiction in future if I can come up with an idea and time period which resonate with me.

Seldom. Sometimes there are influences of movie characters or actors, but the main influence is probably elements of my own character.

No, but I have note and dictation apps always to hand.

I’m not sure I’ve met any writer whose genre or style overlaps with mine, but if I was to return to soft sci-fi, it would probably be Gareth L Powell.

In one of my sci-fi adventures, I based two locations on places I knew in France. One of them I returned to as part of a holiday, but made mental notes for research.

Sweden also features in these books, and I’d like to visit places I’ve only seen on Google maps.

My favourite work to date is 2019’s Tow Away Zone, a quirky American small-town romantic black comedy. It’s been well-received by readers, with 5* reviews on Amazon.

My sci-fi journey started with space opera “Scared Ground” being available on Kindle in 2012.

In 2018 I published my 2nd sci-fi novel – Imperfect Isolation – which embraces robotics, asteroid mining and a snowy drive in an 80-year-old Porsche 911.

The sequel, Reprisals, followed in 2019. In early 2021 I released the 3rd instalment, Trip Hazard.

I’m currently editing a reflective Western. It explores prejudice against the deaf community and the Native Americans, as a man struggles to reconnect with his lost son and come to terms with his own failings.

I’ve written a collection of offbeat humorous stories and vignettes in the style of early Woody Allen prose. The Real Jamie Oliver and Other Stories is basically a window into my nonsensical side.

I also write pantomime & stage drama scripts. I’ve had 8 works performed and reached a total audience of over 5000 to date. 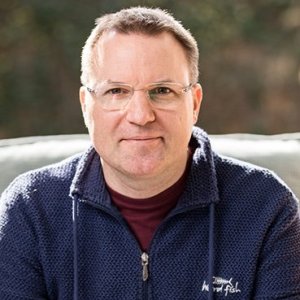