Jude is dragged out of Alt-Country obscurity, out of the dismal loop of booze and sadness baths and the boundless, insatiable loneliness, to scrub up and fly to Australia for a last, desperate comeback tour. Hardly worth getting out of bed for—and he wouldn’t, if it weren’t for Coreen.

But Coreen is dead. And, worse than that, she’s married. Jude’s swan-song tour becomes instead a terminal descent, into the sordid past, into the meaning hidden in forgotten songs, into Coreen’s madness diary, there to waken something far worse than her ghost. 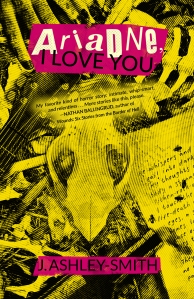 Absolutely. And being the father of two boys – seven and eleven – I don’t get much of that when they’re awake. Most of my writing gets done when everyone in the house is asleep. All through winter, I get up when it’s still dark and can get a couple of hours of undisturbed writing time in before the house wakes. In the warmer months, I find it harder to get up (don’t ask me why), so tend to sit up late instead, with a dog asleep on my legs and the neighbourhood going silent and still around me.

I’ve wanted for a long time to visit the Ukraine, to explore the abandoned, irradiated wilderness around Pripyat, where the Chernobyl disaster occurred. Deadly radiation aside, the area has become a wonderland for wildlife, with wolves, bears and other animals of ancient Europe living amongst the ruins. What excites me most about this area, its unique and peculiar circumstances, is the re-emergence of the mythic past on the ruins of the present. I’ve been obsessed for several years with a particular story idea set in this new wild land, and would love the opportunity to roam freely among the overgrown streets, the decaying schools, and the holy of holies – the Chernobyl power plant itself.

I don’t know if I’d make a very good co-author. I’m a slow writer, and crotchety. I like things to be a certain way. I’m hard on myself and unforgiving with what I write. None of these qualities would really get me in the good books of a fellow writer.

Having said that, I have worked on comics together with my eldest son. We work out the story together, then I write and he draws. We’re collaborating on a time travel story at the moment that he came up with. Only we haven’t had much time to do it, as I’ve had all kinds of deadlines. He’s been getting pretty frustrated with me not progressing my bit.

With most of my characters, and in shorter stories in particular, they just come to me – I just sit back and listen and there they are, weird spellings and all. I rely heavily on instinct when I’m drafting and have considerable trust in my unconscious mind, so when a name pops in and it fits I tend to accept it. It’s rare that I have to change a name, or to sit around picking names.

When I do, though, I go to online census data or registers for names popular in the year my character was born. And, depending on the character, who they are, what they’re like, I’ll pick one of the more or less popular ones, something that resonates with them, their role in the story.

I do have one or two characters, particularly in longer stories, who just won’t settle with their name. With them, I become well acquainted with ‘find and replace.’

Which character would you like to be in this book?

Wow, I’m glad I’m not any of them! Jude is a fairly unlikable guy, whose life is going down the toilet. Coreen goes mad and dies haunted. Ben has to live with the hole her death has left behind…

If I had to pick, I’d go with one of Ben’s daughters. Either five-year-old Peg, explosively excitable, so thrilled at the possibilities of life she can’t sit still for a second. Or Margot, shrewd, analytical, completely unmoved by the ‘unscientific’ emotions of those around her. Her obsessions may be gruesome, but at least she’s got a hobby.

I like a title to be double-edged, to mean one thing before you read a story and another by the time you’ve finished. I like it to conceal a secret, an unknowable glimpse at the heart of the story, that is only unlocked through reading it.

For my last two books, however, the title came first and the story accreted round it. Ariadne, I Love You is a quote from a ‘madness’ letter that the German Philosopher Friedrich Nietzsche wrote to Cosima Wagner, wife of composer Richard. I read a book in my twenties called The Story Of Philosophy, which is a sort of digest of philosophy since the Ancient Greeks, with a biographical summary of the philosopher’s lives interwoven. It’s a compelling book, filled with wonderful little details about all these unusual people. In there I learned, in summary, about Nietzsche’s insanity towards the end of his life, the strange letters he wrote in his madness to friends, relatives, random celebrities, any of which he (humbly) signed either “Dionysos” or “The Crucified.”

I found the title for The Attic Tragedy when I was researching Ariadne. Pursuing the Nietzsche thing, I was reading his first book, The Birth of Tragedy from the Spirit of Music. In this book, Nietzsche refers again and again to ‘Attic’ tragedy, meaning ‘tragedy from Attica’ or the Attic Peninsula, home of ancient Athens and birthplace of what we now think of as Ancient Greek culture. I loved the phrase, especially when scrambled for the modern Western context, in which an attic means something quite different.

I don’t know if I ever exactly ‘pick’ a cover – I rather grope, stumbling towards it through the dark corridors of possibility, guided by the inestimable talents of Tricia from Meerkat Press. It’s a wonderfully inequitable collaboration in which she does all the work: I sit around having vague feelings about things and Tricia turns them into beautiful realities. I absolutely adore her work and greatly enjoy the process. We are quite simpatico on the kind of covers we like and I’ve been gobsmacked by the two she’s come up with for my stories so far.

If a movie or series would be made from your books, would you be happy with the ‘based on’ version or would you rather like they showed it exactly the way you created it?

I think it’s unrealistic to expect a story to translate directly from book to film with no changes. The mediums are so different. While my writing is quite visual, it’s not at all ‘cinematic.’ I don’t imagine it as a film as I’m writing. I tend to lean into the possibilities of the written medium as hard as possible, or as appropriate for a given story, recognising that what works for books or even comics will not work for cinema.

The one thing I would put my foot down about is the characterisation. I could love any version of a story I wrote if the characters were brought faithfully to life, no matter what they did or didn’t do. A film that stuck religiously to the plot of a book, but in which the characters were realised wrongly or were poorly interpreted, I would have to disown.

Goodness, yes! Over the next six months I’ll be wrapping up two new books – a story collection and a novel. I’m just putting the finishing touches on the collection at the moment, which includes stories published over the last six years and two new novellas. As soon as that’s done, I’m moving straight on to final edits of a novel I’ve been picking away at for about the same length of time. Really looking forward to having both of these big projects wrapped – and excited at the prospect of sharing them!

At the absolute top of the pile is The Bridge by JS Breukalaar. I’m a great fan of her work and have been waiting impatiently for her latest novel to drop. We’ll be launching each other’s books online later this month, so watch this space for details of the event. If you like your fiction weird and dark, you won’t want to miss this!

Below that is Hitch by Canberra author Kathryn Hind. I met Kathryn at our local dog park and we swapped books, became friends – our dogs play together. My wife read Hitch in a single sitting and was completely blown away. I’m a much slower reader than she is, so expect it’ll take me a wee while longer, but I look forward to sharing that experience.

J. Ashley-Smith is a British–Australian writer of dark fiction and other materials. His short stories have twice won national competitions and been shortlisted seven times for Aurealis Awards, winning both Best Horror (Old Growth, 2017) and Best Fantasy (The Further Shore, 2018). His novella, The Attic Tragedy, was released by Meerkat Press in 2020 and has since been shortlisted for an Aurealis Award, an Australian Shadows Award, and a Shirley Jackson Award.

J. lives with his wife and two sons in the suburbs of North Canberra, gathering moth dust, tormented by the desolation of telegraph wires. 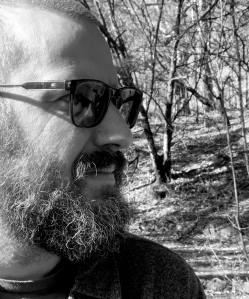