1870. Apprentice lighthouseman James Meakes joins two others at the remote offshore rock of Ripshaw Reef – replacement for a keeper whose death there remains unexplained.
Meakes’ suspicions grow as he accustoms himself to his new vertical world. He finds clues, obscure messages and signs
that a fourth occupant may be sharing the space, slipping unseen between staircases.
With winter approaching, the keepers become isolated utterly from shore. Sea and wind rage against the tower.
Danger is part of the life. Death is not uncommon. And yet as the storm builds, the elements pale against a threat more
wild and terrifying than any of them could have imagined. 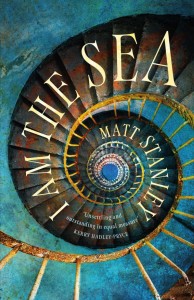 The corpse has been tied to the balcony railing for five days, enshrouded in a bed-sheet cerement. Five days and five nights out in the sea air, dampened by drizzle and spray, soiled by seabirds, lit intermittently by a beam that could not ignite life even as it prevents death. Gust buffeted. They say the torso rocked in the gale of the second day, as if the thing was struggling, Lazarus-like, to escape its wrappings. I have watched it through the telescope these last two days from the shore station but it hasn’t moved for me. I don’t know why I gaze at it so. Perhaps because that pale pupal form, limbless, faceless, has altered my fate. But for this death, my first posting would have been some other house
than Ripsaw Reef.
Spencer was his name. There’s no notion, as yet, of how he died – only that Principle Bartholomew and Assistant Keeper Adamson were seen lashing him to the bars on the day they signalled for aid.
I understand it is not official Commission practice to expose the body in this way. Nor is it a simple matter to hoist a
deadweight vertically up the tower. But keepers around these isles have learned that a cadaver soon becomes noisome if confined, and accusations of foul play may be avoided only if the dead man is available for autopsy. He cannot simply be tossed into the sea with the day’s ashes. Better that the gulls settle on him, not knowing that a skull sits beneath their delicate webbed feet. There’s no ignominy in it. The hero Lord Nelson bears the same fate with equanimity in Trafalgar Square – he, too, supported on an imperious column almost
the same height as Ripsaw.

Matt Stanley was born in Sheffield and achieved a first class degree in English and American Literature from the University of East Anglia. He is the author of a number of detective novels for Macmillan and has previously taught an
MA in Creative Writing at Sheffield Hallam University.
I am the Sea is Matt’s eleventh novel.