Magic – a legacy of the ancient era, created by genetic manipulation. For as long as Liya can remember, her magic has been a curse. Something to hide, something to despise. As king’s spy, she ventures out to uncover more about the political marriage of the hostile kingdom. Her nerves intensify when she realizes that her former lover, Haydn, is to be the future king of Dar’Angaar. With a war between the kingdom hanging in the balance, she and her best friend Ewan discover an ancient scroll from the long-lost kingdom of Elladur. It reveals a mysterious portal to another world, where eternal darkness and a king await his revenge.

Yet, at such a risk, who would do such a thing? The answer might be closer than she realizes. 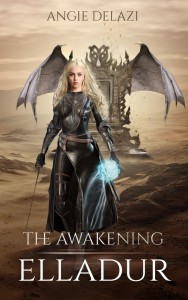 She gasped, inhaling intermittently despite her burning lungs. Her muscles ached, but she kept running. As if through a veil, Liya saw shabby wooden huts, holes gaping through the roofs of many. An acrid, sulfur smell entered her nose, nauseating her. The same thing had happened a few minutes ago when she and Ewan were still in front of the enormous Qilonian wall. A shudder skittered down her spine; she felt that they were being watched. She’d felt this way since she arrived in Qilon.

Ewan stopped abruptly, and Liya bumped against his back. She heard him swear softly and followed his gaze. Six men came towards them. They split into groups of two to cut off Liya and Ewan’s escape route.

“I’m afraid they’re after whatever you picked up earlier,” Liya hissed.

Ewan had not forewarned her, so she was unarmed except for her black-bladed dagger. Thankfully, she always kept it on her. She had found it in the cave by Lake Smutny. It was ancient and unique.

Her friend looked at her and whispered, “No one knew. Honestly!”

“Our pursuers are not the men from the cabin.”

Before Liya could reply, one of the men approached them.

Liya drew her dagger, and Ewan followed suit, both of them getting into position.

“We are putting our lives on the line for a scroll. I hope it’s worth it,” she said softly.

“It is!” Ewan replied, just as quietly. “As soon as we break through the front, we run.”

She focused on the two men who had stopped less than five steps away. Ewan eyed them contemptuously, and they rushed forward. Liya slashed at the first man with the knife, but he parried skillfully. The moment he raised his sword, she spun around and plunged the knife into his left side. She rammed her knee into his stomach, then whirled around skillfully to dodge the attacker behind her. Out of the corner of her eye, she noticed Ewan strike down one of her adversaries with his knife, then grab the sword to attack another one. Obviously, the strangers had not expected them to fight back. How unfortunate for these men!

Writing has always been my passion. As a child, I loved the world of myths and legends and soon I became a fantasy and romance lover. But also the world of philosophy and great secrets have done it to me. I started writing my first stories when I was 13 and returned 8 years ago. I am also a booklover, with reading between 70-100 books yearly.