Is fame the perfect cover for murder?

Artist, James Ravencroft, thinks so. As his reputation as a painter grows, so does his need to find the next perfect model. They don’t just pose for him, they become his still life – his Stone Angels.

Haunted by his dead mother’s notoriety, James goes in search of an agent to give him what he wants: international prominence. But then, James discovers that his agent, Basil Hallward, has his own agenda. Now James must turn the tables and destroy the one person who can give him the publicity he seeks for his Stone Angels paintings.

Finally after ten years, he achieves his ambition to have a solo art exhibition for nine of his paintings, but the police are closing in on him.

James has one last chance to complete the tenth painting, but has he left it too late? 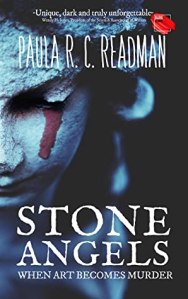 Oh yes, though since developing tinnitus I have to have instrumental music on in the background otherwise it’s difficult for me to focus. I’ve loaded a huge selection onto my computer and now have a file for different writing moods. In the summertime, with the windows open, the chatter of the birds outside is quite soothing too. I’m in a village in Essex, England so it’s quite peaceful where I live, but there’s a lot of building work going on at the moment as more houses are being built.

I’ve always had a great interest in Egypt and loved the temples, mummies and especially its long history. All countries have an interesting history so any country I have an opportunity to visit would at some point find its way into one of my novels or short stories I’m sure.

Hmm, interesting question. I’m not sure I would co-write a book unless it was a non-fiction. At a push and for the sake of this question it would have to be with Dawn DeBraal an American writer. Dawn and I became friends when we were both writing for an Australian publishing company, Black Hare Press. Dawn is a prolific writer, very sassy but a little bossy so I’m sure she would keep me on my toes.

Hmm, now I’m not sure whether I should give my secrets away here, but I use two books. A dictionary of surnames by Mark Anthony Lower which was left over from my days spent researching my family history. I have a collection of nonfiction books which have come in handy for my fiction writing. The second is a dictionary of fictional characters by William Freeman. I pick and mix my character’s name though as they develop in my mind their names come to me. I’m dyslectic and find it difficult to pronounce certain names. If I keep stumbling over them when reading my work aloud, I have to change them.

Which character would you like to be in Stone Angels?

In Stone Angels it would have to be the art dealer Basil Hallward’s secretary, Jenny Flood. Most of the other female characters in the novel come to a sad ending. Through Jenny the the reader gets to know about a more caring side of the artist, James Ravencroft. James has feelings for Jenny, but he’s unable to put them into words. He fears her knowing his true nature, as he’s sure she would no longer respect his ability to paint his masterpieces.

How did you come up with the title, Stone Angels?

I wanted something short and powerful. The painting that the artist James Ravencroft paints are called ‘Roofscapes’ but to him his models are his angels. The models have to remain perfectly still while he paints them, so the most natural thing was to call the book, Stone Angels.

How did you pick a cover for your book?

My publisher, Laurence at Darkstroke gave me a selection of images to choose from, and this picture was the most suitable. Having an image of a stone angel in a graveyard would have looked like so many other book covers. This cover shows just the side of a stone Angel’s head with a red tear on the cheek which could be either blood or paint does add an air of mystery to the book. Plus, there’s a scene in the book where a comment about the paintings of the stone angels look as though they are crying tears of blood.

If a movie or series was adapted from your book, Stone Angels would you be happy with the ‘based on’ version, or would you rather they showed it exactly the way you created it?

This is an interesting question. I know, and understand that screenwriter’s job is to condense a book into two hours or maybe a four hour story line if it is a series or a film. This can be a hard thing to achieve and sometimes the film taken from a book is nothing like the plotline but just some vague essence of it. I would hope the screenwriter who took on Stone Angels would get under James Ravencroft’s skin enough to understand what drives him to commit his crime, rather than just falling back on shocking the audience by turning James into a bloodthirsty raping killer. When writing the book I was very careful about how I portrayed my artist, James as I needed to keep the readers on board. As James loves the purity of beautiful things he wouldn’t rape or physically damage what he loves the best, though through his obsession he neglects his models’ needs.

Yes, I have. As The Crow Flies, tells the story of two graves and one body. The book isn’t quite a follow-on novel more of a reintroduction of Granny Wenlock. I wrote a short story that became a novella when it was published by Demain Publishing. The novella, The Funeral Birds has sold well and has twenty-two reviews on Amazon. Dean of Demain asked me if I was writing a novel with the same characters in he would be interested in reading it.

The Funeral Birds tells the story of Dave Cavendish who’s ready to close his detective agency for good, after his wife, Joan complained that it wasn’t paying for itself. Dave is too fond of giving his services away for free. Just as he was about to close the business down for good Ms Sinclair swans in with a problem she’s having with owls. Granny Wenlock knows Ms Sinclair is nothing, but trouble and she isn’t about to let a little thing like her death four hundred years ago stop her from warning Dave to be vigilant.

Writing the novel allows me to explore more about Granny Wenlock’s life before she was accused of witchcraft and murdered as well as giving Dave and Joan a new puzzle to solve. As The Crow Flies is told on three timelines and is set around a fictional village of Temple End which has elements of the landscape where I live.

I have a problem, but I’m sure I’m not the only reader who does the same. I never just have one book that I’m reading. My husband bought me Alice by Christina Henry. I’ve just bought The Future Brokers by D N Knox & Colin Payn and What The Hell Happened to Joan? by Copper Rose Garrison McKnight

After years of learning as much as I can from books, I finally feel I’ve mastered the skills needed to become a confident writer. I’ve worked main on building a C.V of published short stories and competition wins and now I’m ready to focus on writing novellas and novels. Please come a join me on the next stage of my writing journey which is to market my novel. This part is going to be tough so if you don’t want to travel alone we could learn together. I’m hoping to push my novel Stone Angels up the bestseller list. It’s not going to happen overnight, but who knows. Keep Your Dreams Alive.

My journey started in 1998 with a big milestone in my life hovering on the horizon. I set myself a challenge to see if I could get something in print with in ten years.

First, I had to learn the basics like spelling, grammar, and punctuation. Yes, these are things I should’ve learnt while I was at school, but the sad truth is I left school not be able to understand any of it. Not because I was badly behaved, or didn’t want to learn, but because I was classed  as a slower learner.

I could read, and understood that a sentence started with a capital letter and a full stop, but nothing more.

I’ve always enjoyed reading, so this became my starting point to learn how to write.  With my husband’s help and Ebay I bought over 250 books on ‘How to’ write and English Grammar. While working full-time in a factory, and during tea breaks I read the ‘how to’ books. In 2010, my first story was published by English Heritage.

After learning my craft and building my confidence through getting short stories published and entering competitions, I’m now moving from writing short stories to writing novels. My first novel ‘ Stone Angels’ will be published this year after having 37 rejections and many hours of editing, rewriting and resubmitting. Never give up and always believe anything is possible with determination and hard work.

Other books by the author