The Essential Guide to CBD is an authoritative but user-friendly primer on CBD.

CBD has splashed across the nation’s headlines, taken the country by storm, and has everyone from Coca-Cola to Starbucks considering adding this new “miracle supplement” to their drinks. But the FDA has only approved it for use in treating epilepsy in children.

What is CBD, anyway? What’s the difference between CBD, THC, cannabis, hemp, and marijuana? Can CBD help me lose weight? How much CBD do I need to take to help my condition? What do I look for when buying CBD? Is it better to take CBD oil or gummies or what?

The Essential Guide to CBD will answer all of these questions and much more, including both first-person anecdotes of real people’s experiences with CBD and straightforward reporting about what studies have actually been done and what they show.

Written in part by the experts at Project CBD, the book will separate fact from fiction, hype from reality. 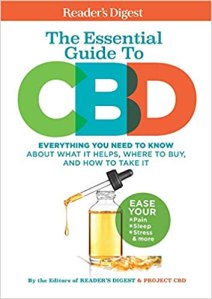 Heart disease is a catchall phrase for the disease that develops when the arteries of the heart cannot deliver enough oxygen-rich blood to the heart, leading to events like heart attack. It’s the leading cause of death in the United States, killing about 655,000 Americans each year, which is about one in every four deaths. Key risk factors for heart disease include unhealthy diet, physical inactivity, diabetes, overweight and obesity, and excessive alcohol use.

Similarly, a stroke, which is sometimes called “brain attack,” occurs when blood flow to the brain is blocked or reduced. So the same precautions that protect against heart attacks and other cardiovascular disease (like diet, exercise, and a healthy lifestyle that can include CBD supplementation) can help prevent stroke. CBD can also play a key role in protecting the brain after a stroke.

Research shows that CBD can help maintain healthy cardiovascular function and prevent heart disease on a number of fronts, including protecting against hardening of the arteries, lowering blood pressure, and reducing the incidence of potentially dangerous arrhythmias.

It starts inside your arteries. When the linings of your artery walls are injured, they build up plaque that can cause the arteries to narrow. This is called atherosclerosis; it’s a prevalent form of heart disease. Inflammation is a leading cause of this type of injury, as is high blood pressure. Exposure to tiny chronic doses of THC has been shown to slow the progression of atherosclerosis in animal studies.

THC and CBD are both vasodilators, meaning they widen your blood vessels, a process regulated by the endocannabinoid system. This can have a pronounced positive effect on blood pressure. In a 2017 study, British researchers gave a group of men either 600 mg of CBD or a dummy supplement and monitored their blood pressure at rest and again after stress tests that normally increased blood pressure. Just that single dose of CBD reduced the participants ’resting systolic blood pressure by 6 mmHg. Plus, they had less of a spike in blood pressure in response to stress than those taking a single dose of a placebo pill.

In a follow-up study, where the researchers gave 26 men 600 mg of CBD or a placebo for seven days, the results were mixed. Measurements of resting blood pressure revealed that the participants had developed a tolerance to the CBD over time, but CBD’s ability to lower blood pressure during stress persisted. (Of course, if you are already dealing with low blood pressure, the blood pressure–reducing effects of CBD are something to be aware of, and you may need to avoid high doses.)

CBD may also protect against cardiac arrhythmias, or irregular heartbeats, where the heart beats too fast, too slowly, or with an irregular pattern. Arrhythmias can be brought on by long-term stress, as high cortisol levels can raise blood pressure, blood cholesterol, blood sugar, triglycerides, and other risk factors for heart disease in general. CBD’s anti-anxiety properties can help combat stress, lower cortisol, and protect against arrhythmias related to those causes.

Research shows that CBD also can suppress irregular heartbeat caused by stroke-induced ischemia (inadequate blood supply to the heart) and can minimize tissue damage caused by the lack of oxygen. A study published in the British Journal of Pharmacology found that when rats were given CBD 10 minutes before a 30-minute coronary artery occlusion (partial or complete obstruction of blood flow in the coronary artery, which may cause chest pain, heart attack, and tissue damage) or 10 minutes before blood flow was restored, they experienced fewer arrhythmias and less tissue damage than rats not given CBD. Research in this area is still in the early stage, but it already shows great potential.

Since cannabinoids also mop up free radicals — and improve the effects of other antioxidants in the body — CBD may also protect against heart disease by reducing the cellular damage that happens when we’re exposed to free-radical producers like processed foods and environmental pollution.

CBD also delays the reabsorption of a chemical called adenosine (meaning that you have more of it in circulation), which quells inflammation and helps maintain healthy heart function.

If you’re already taking medications for blood pressure, cholesterol, or other heart conditions, it’s important to consult with your doctor before you start taking CBD. High doses of CBD may interfere with the metabolism of some of these drugs, which could have problematic consequences.

An excerpt from The Essential Guide to CBD by the editors of Reader’s Digest & Project CBD.

Martin A. Lee is the co-founder and director of Project CBD and the author of several books, including Smoke Signals: A Social History of Marijuana—Medical, Recreational and Scientific, which received the American Botanical Council’s James A. Duke Award for Excellence in Botanical Literature. Named by High Times as one of the 100 most influential people in cannabis, he is the 2016 winner of the Emerald Cup’s Lifetime Achievement Award. Lee is also co-founder of the media watch group FAIR (Fairness & Accuracy In Reporting) and the author of Acid Dreams: The Complete Social History of LSD—The CIA, the Sixties and Beyond.