It’s 1915 and Britain is at war as Kate Hunter’s sequel to The Caseroom – shortlisted for the 2017 Saltire First Book Award – opens on the next stage in the lives of Iza Orr, skilled compositor, and the workers in Edinburgh’s print industry. At a time of momentous events, we step alongside Iza as she copes with unexpected complexities of patriotism, women’s suffrage, worker victimisation and a historic wartime lockout. `It seems the country needs starched cloth-lappers and lunatic asylum attendants, but it does not need books, does not need learning and intellectual stimulation.’ Printers are denied reserved occupation status but, with bankruptcies looming, the jobs of Edinburgh’s dwindling number of female hand typesetters are on the line. Riven by challenges both political and personal, Iza must weather conflicting calls for loyalty to nation, to class, to gender, to family – her marriage to troubled John, her children, her estranged daughter Mary, now a grown woman – to discover her true common cause. 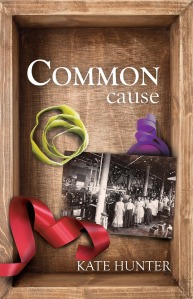 The making of books by an enthralling, arcane process; women’s struggle for dignity and equality (not to mention the vote); Edinburgh, the beautiful, dramatic, two-faced city of my childhood (city of Jekyll and Hyde); 1915–-16 and the horrors and heartaches of war; love and family life in harsh circumstances – inspiration to bursting!

The 1911 census revealed the fact that my paternal grandmother was a compositor. I was astonished. I knew all too well, from working in the print industry, that until the invention of computers compositors were men. And the women of my family in that era were domestic servants or envelope folders. (One female relative was down as a ‘fancy hair worker’, but that’s another story.)

My main character, Iza, was inspired by that bald fact in the census, but she isn’t my grandmother. She couldn’t be. Like most working class people, my forebears left scant record of their existence. Still, the life of a grandmother I know little about was the initial inspiration.

I loved researching the book, and I discovered that my grandmother was one of just 800 Edinburgh women who were allowed to train as hand typesetters – called comps. For a few decades they made a place for themselves in the caseroom, that male domain where books were typeset.

Sian Reynold, author of the one academic study of these events, Britannica’s Typesetters, met three surviving women comps in the 1970s. They loved their job – the skill of it, learning from the Encyclopaedia Britannica, working on different chapters of novels such as Jude the Obscure and calling out ‘what’s that hussy up to now?’

As a teenager in Edinburgh I’d worked in a print works, and some things hadn’t changed since the nineteenth century. Now I wanted to refresh my memories of the sights, sounds and smells of Victorian print technology, so I visited print museums and did a course in hand-typesetting.

I also spent time in my home city of Edinburgh, recapturing the language of my childhood. Voices are a big part of my writing. Immersing myself in those familiar turns of phrase, accents, pauses, ways of being, was a central inspiration.

Kate Hunter was born in Edinburgh and lives in Milton Keynes. She left school at 15, working in the printing industry and as a tutor in trade union education. Her novels are based in part on the experiences of her own family.