Aimee Trapnell reluctantly leaves her apartment on Manhattan’s Central Park West to return to her childhood home in Georgia for her father’s ninetieth birthday. Also on hand are her two brothers, wily Marsh and ne’er-do-well Trainor. With a forty-billion-dollar inheritance at stake, they’re willing to do whatever it takes to make the old man happy.

To their shock they learn that what their father wants for his birthday is to kill someone. He doesn’t care who it is. He just wants to know what it’s like to commit murder.

Betrayal, double-dealing, and fast-paced action set the Trapnells on a collision course with an unexpected villain. Their journey takes them from the swamps of Georgia, to Italy’s glittering Amalfi coast, to rugged Yellowstone National Park. 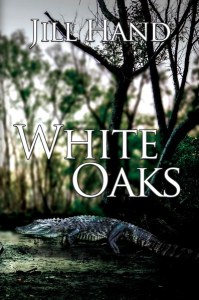 Earlier that morning a man named Pewee Pelletier drove his pickup truck through a gap in the tall privet hedge in front of White Oaks. A discrete metal sign, white letters on a forest green background, declared it to be the service entrance to the estate.

The truck’s tires crunched on the gravel roadbed as Pewee drove past the kitchen wing, past the greenhouses and the water cascade, water burbling over its stone steps, and down beyond the old slave graveyard. He parked beside the white granite mausoleum. TRAPNELL was carved in stern block letters in the triangular pediment above the door.

It’s only seven-fifteen and already it’s hot as a crotch, Peewee thought, squinting at the white disc that was the sun, blazing mercilessly above the tangle of trees marking the beginning of the swamp. He wanted to finish the day’s work early and go fishing. He’d sweep out the mausoleum and get it looking shipshape for Blanton Trapnell’s big sendoff. Then he’d swing by Holy Redeemer and White Knoll cemeteries and cut the grass before knocking off for the day. With any luck he’d be on the lake in his bass boat by noon, along with a cold six-pack and a container of minnows from Buzzy’s. Perhaps he’d get Gordon Buzzy to sell him a bottle of Old Rocking Chair. He bit into the egg salad sandwich his wife had made for him.

Chewing egg salad on white bread liberally smeared with mayonnaise he looked at the mausoleum and snorted in contempt. The damn thing probably cost more than his house. Rich people, he thought resentfully. At least rich people died, just like everybody else. Blanton Trapnell wouldn’t be driving his Rolls-Royce through town anymore, not deigning to wave at Pewee when Peewee drove past going the other way in his truck.

Peewee always waved when he encountered other drivers. It was the neighborly thing to do, but Blanton Trapnell thought he was too good to acknowledge people like Peewee who weren’t born with a silver spoon in their mouth. Blanton Trapnell wasn’t neighborly. Now he was dead and good riddance. Let’s see what Saint Peter would have to say about his lack of neighborliness when he showed up at the Pearly Gates. Peewee bit into the dill pickle his wife had packed along with the sandwich. Pickle juice ran down through the beard stubble on his chin as he smiled, thinking of Old Man Trapnell being denied admission to Heaven and instead being cast, shrieking, into a lake of fire.

He crumpled the pieces of wax paper the sandwich and the pickle had been wrapped in and stuck them in the hip pocket of his green Carhartt work pants. Then he took the key hanging from a cardboard tag marked ‘Trapnell’ that Chapman had given him and went to unlock the door.

Leaving the bronze door open to let it air out inside, Peewee got a push broom and a pry bar out of the truck. He carried them into the cool interior of the mausoleum and sniffed cautiously. It smelled musty, like closed-up spaces always did. He also detected the unmistakable stink of decomposition.

The decomp odor wasn’t coming from any of the corpses in the crypts. Those were embalmed and would be as dry as old leather. It was something freshly dead, most likely a possum or a raccoon that had crawled through the ventilation shaft on the roof. Pewee figured he’d find whatever it was lying in the shadows, paws-up. He drew on a pair of rubber work gloves and patted the black plastic trash bag tucked in his belt. Ms. Possum or Mr. Raccoon would be going into the bag. He just hoped they weren’t too gooshy.

A stained glass window in the rear wall threw splashes of red, blue and green over the stone floor. The window’s subject was utterly inexplicable to Peewee: not Jesus or some saint but three naked men being attacked by huge snakes. Peewee stared at it, trying to recall which Bible story it could have come from. There were several involving animals. There was Daniel in the lions’ den, and Jonah and the whale, and one about a talking donkey that got pissed off when its owner kept hitting it with a stick, but he couldn’t think of anything involving snakes, other than the Garden of Eden thing.

He leaned the broom against the wall inside the door. He’d sweep the floor before he locked up.

The double crypt where Blanton Trapnell’s coffin would go was on the left wall, down near the snake window. Trapnell’s second wife was in there and he would be going in beside her. The late Mrs. Trapnell had been a terror. Peewee wouldn’t want to wait for the last trumpet to blow while lying beside a bitch like Deirdre Trapnell. Fortunately he wouldn’t have to. He’d be buried out at Holy Redeemer with his wife and his mama and daddy and the rest of his family. The Trapnells could keep their old mausoleum with its bizarre naked-men-and-snakes window, thank you very much.

Pewee intended to use the pry bar to remove the granite slab known in the funeral trade as a shutter from the front of the double crypt. The shutter was inscribed with Blanton’s name and date of birth, as well as his wife’s name and her dates of birth and death. A stonecutter would add Blanton’s final date and it would go back in place and be sealed, after his bronze casket went in.

The casket was a model called the Chancellor made by the Batesville Casket Company. It cost $25,000. It had a variety of high-end features, including a rounded glass seal, bronze swing-bar handles, fully adjustable inner bed with head and foot velvet pillows and matching velvet blanket and a hidden locking mechanism.

Blanton’s purchase of the most expensive casket among those on display in Chapman’s showroom had been a red letter day for Lycott and Joelle Chapman and their two children. The family celebrated by taking a trip to Jekyll Island, where they’d gone to a water park.

Peewee walked down the center aisle, pausing to kick at a drift of leaves that must have blown in under the door. As he kicked at the leaves, scattering them, his work boot came in contact with something unyielding. He looked down to see what it was and found it was a foot, clad in a narrow, polished black shoe.

The pry bar hit the stone floor with a clatter as Peewee turned tail and ran.

Jill Hand is a member of the Horror Writers Association and International Thriller Writers. Her Southern Gothic novel, White Oaks is available on Amazon and from the publisher, Black Rose Writing.

Advance readers called it a fast-paced, hilarious account of three siblings who are competing for their father’s forty-billion-dollar fortune while trying to prevent the destruction of Planet Earth.

Jill Hand’s novel, Rosina and the Travel Agency, and The Blue Horse, a novella, follow the adventures of a young woman rescued from a railway accident in 1889 by a twenty-fourth-century enterprise in the business of time travel tourism. 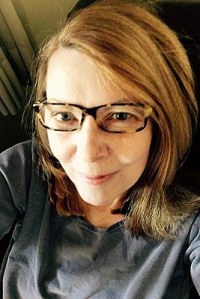