Henry Ford, the cutest Border terrier puppy, lives with his papa Alan and mama Jenny. Alan loves his job, playing golf and above all, Henry. Jenny loves designer clothes, handbags and shoes. She doesn’t love Henry. When Jenny insists on a week of high life on Majorca, Henry’s world takes a nosedive.

An attempted dognap and a traumatic stay in the veterinary clinic leave Henry a sad and confused puppy. Desperately lonely he sets off on an adventure with his friend Bully, a streetwise Essex bulldog, where he meets the beautiful Paula and for the first time experiences the heartbreak of puppy love.

Back at home, his mama and papa’s marriage is on the rocks – will Alan agree to Jenny’s ultimatum? Will he choose Jenny or Henry? 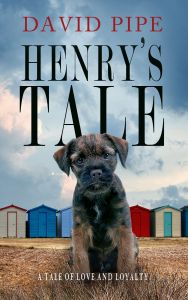 David Pipe was born in 1949 in a small Essex village. He attended a local grammar school then the University of Hull where he took a B.Sc in chemistry. He worked in the pharmaceutical industry in England and South Africa before studying for a PhD in organic chemistry at Imperial College. After spells at universities in Geneva and Mulhouse he joined the oil industry in Germany where, aged 53, he gratefully took a redundancy package. Following a period of self-employment he wound down his business, eventually giving it up to scratch the writing itch which has produced Sacrificing Starlight, a timely reminder of the risks our children face and Henry’s Tale, where ghostwriting for his furry friend he describes the emotional growth of a puppy on the rollercoaster of life, compressed into a few weeks because puppies learn faster than their staff.

When he’s not writing David spends his time travelling, reading, swimming and jogging. He is married and lives in Hamburg with his wife and their Border terrier Henry.