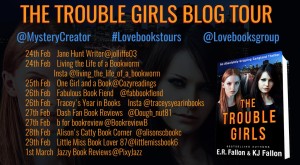 It’s in her blood…

Camille O’Brien’s father was an Irish gangster who was betrayed and murdered.

Violet McCarthy has inherited control of the Irish mob.

The two women were once friends, but the exposure of the past has made them enemies, and Camille believes that what Violet has should be hers.

Now they must fight against each other as Camille strives to gain control of the mob in any way she can, no matter how brutal, and Violet struggles to keep it.

Love and loyalty are tested as they push each other to the edge.

A few days later a wake, which Kevin’s mother and father had planned, was held at a funeral home, and Violet and Tommy attended with Catherine. They arrived and parked across the street and outside found a long line of people waiting to pay their respects. On the other side of the street, Violet noticed that every other car was black. They started to wait in the line, but Kevin’s father came out and spotted them and had them cut the line. They met Simone, a plump, attractive woman with tears in her eyes, inside and Violet embraced her. Simone kissed Tommy’s cheek and shook Catherine’s hand.

“Catherine, I haven’t seen you in ages. How are you?” she asked her.

“You’re strong just like your father was at your age,” Simone said to Tommy as she smiled at him. “You’ll be okay.”

Violet knew that Simone was trying to make herself feel better, but she also wanted Tommy to know that it was okay for him to show emotion, so she squeezed his shoulder.

“Joe, Vito, and Billy are already inside,” Simone told Violet. “They’re staying far from the windows because of the photographers outside.”

Joe was the name of the boss of the Alfonsi crime family. The ‘photographers’ was a codeword for the FBI, who often watched mafia funerals to see who attended them and who the current players might be. Violet thought of the black cars parked outside.

Simone and her husband went to greet an older couple who’d entered, and Violet walked with her mother and Tommy into the room where Kevin’s closed coffin rested behind rows of colorful flowers. It looked like a reception would be held in an adjacent room afterwards. The three of them sat down near Camille’s stepfather, Vito, and her ex, Billy, and Violet saw the boss and his wife seated in the row opposite them.

Vito and Billy nodded at her and she smiled, but the boss didn’t see her. After a moment, Violet took a deep breath and took Tommy’s hand and led him to Kevin’s coffin. Catherine followed behind them.

Tommy refused to look despite the coffin being closed and Violet held him as he cried, which she knew wasn’t easy for him because he wasn’t a little boy anymore and public hugs embarrassed him. Violet dried her eyes because seeing Tommy so upset made her emotional.

Best-selling crime author E.R. Fallon knows well the gritty city streets of which she writes. She studied criminology and was mentored by a leading advocate for the family members of homicide victims. E.R. is currently writing a book about living with autism and also working on her next gangland book, The Trouble Legacy, with her writing partner, KJ.

KJ Fallon is a former reporter with Time magazine who currently works as a freelance writer for numerous media outlets.